Should You Ditch the Morning Coffee to Be More Productive?

This is a guest post by Ben Mulholland, a writer with a fascination for strategy, bad gifs, and research at Process Street.

If there’s one thing I’ve learnt in my first year of remote work, it’s that productivity is a fickle mistress.

From morning routines to tools which lock your computer for 10 minutes every hour, there are almost innumerable ways the wide web will profess to boost your efficiency with practically no effort.

Unfortunately, most (but not all) of it is rubbish.

Humans aren’t machines, and there will forever be the struggle of staying on track under the constant temptation of distraction.

Perhaps you’re uploading an image to Imgur for distribution purposes, only to lose a half hour to a collection of Calvin and Hobbes.

Alternatively, you could be looking to engage with a Twitter list of influencers once a week and become bogged down with the many tempting posts in your feed.

Productivity Tools Are Great, But You Are What You Drink

There is one area of productivity “hacks” which appears to bring striking results, and it all comes down to what you drink whilst you work.

We all know it’s important to stay hydrated, and many (myself included) love to fuel their brain with a steady influx of caffeine to keep them on track, but is that really the best option?

To answer this question, let’s take a look at some of the biggest contenders for liquid productivity:

Water Isn’t the Be All and End All

First up, let’s hit the basics. As I’ve said in the past, dehydration makes you unfocused, sluggish, irritable and can bring on one monster of a headache, but there is a myth which we need to lay to rest if we’re to talk about why you need to be drinking more water.

You do not need to be drinking eight glasses of water per day.

Sure, you need to intake around 2.5 liters of water per day to stay hydrated and avoid any adverse effects, but the sources which reference this figure so many times have about as much weight as the latest “study” from a shampoo advert.

A significant chunk of your water intake will depend on what you eat and the other liquids you drink.

For example, if you have a slice of watermelon for breakfast then you’re already well on your way to meet your quota.

Hell, even your morning coffee counts!

Couple this with the fact that your required intake will depend on your weight, how physical your work is, and the temperature of your environment, and it’s just not realistic to give such a sweeping statement.

Instead, you need to apply some common sense; when you get up in the morning, try to make sure that a glass of juice or water is the first thing to go down the hatch to combat the morning grogginess.

After the initial cup, you should just be reaching out for your water when you’re thirsty to enjoy anything up to a 14% increase in productivity.

My advice would be to have a bottle (or glass) of water on hand at all times so that you’re not tempted to go without for the sake of staying on task.

Also, yes, you will probably be going to the bathroom more than you’re used to, but the resulting payoff is worth it; better a clear head with bathroom breaks than a muggy mind that takes twice as long to work through a problem.

Coffee – Time it right with Moderation

Whilst I could wax lyrical about the wonders of black coffee, I’ll stick to the facts for this one.

Coffee is a brilliant pick-me-up; it gives you a jolt of focus, at the cost of a later slump in productivity.

Not only that, but the more caffeine you ingest on a regular basis (coffee or otherwise), the more you will need just to function at your usual pace.

So, is this a bad thing? Should you be ditching your morning cuppa in favor of plain old water?

Along with a host of potential health benefits, the burst of focus you can receive is highly beneficial in tasks which do not require a huge amount of creativity.

For example, if you have an article researched and planned out, a coffee will serve to keep you on track as you write.

Whilst creative tasks (such as designing a new CTA) may be hindered by the extra focus, if you feel yourself losing the plot on a monotonous task then caffeine is your best bet to stay productive.

So, unlike with water consumption (whereby you should just drink when you’re thirsty), how much coffee should you be taking to avoid the uncontrollable jitters?

Well, once again it will depend on how much caffeine you regularly intake.

Nonetheless, a single cup (90-200mg of caffeine) when your head needs a kick start is a good way to start.

You also shouldn’t be having more than two cups of coffee (400mg of caffeine) per day.

Soda – too many negatives

Soda is pretty much a worse version of coffee, at least in terms of productivity.

Whilst the average bottle of Coke (12 or 20 fluid ounces, depending on glass or plastic bottles) has less caffeine than a cup of coffee, the level of sugar involved will also result in any benefit from that caffeine being squandered, and the resulting crash much worse.

Much like coffee, any beneficial effects will also be lessened through regular use, to the point where the crash overtakes any potential high.

As Celestine Chua describes it, drinking soda can be likened to allowing your mind to work autonomously; “my conscious self is only allowed to observe in the background to give limited inputs”.

Essentially, even if we were to ignore the incredible number of sources citing the health issues associated with drinking soda regularly, there is next to no benefit to be gained which could not be better achieved with strategic use of coffee or tea.

Alcohol – Save it for After Work

It may seem like an odd choice to include alcohol in this list, but whilst going through the potential candidates it would be a shame to not reiterate the best take on the issue.

The deal with alcohol is this; no matter if you work in an office, a construction site or at home, leave the booze out of the equation (at least until you clock off for the day).

Whilst a 2012 study conducted by the University of Illinois suggested that a small level of alcohol may provide a temporary boost to productivity, the negatives associated with regular alcohol use (such as memory loss, poor coordination, slower reaction times and sleep disruption) far outweigh the positives.

Having said that, there is some evidence to suggest that working the morning after having a couple of drinks is no different than if you had stayed sober.

As long as you get enough sleep and don’t drink so much that you have a splitting headache, you’ll be just as productive as your teetotal colleagues.

Remember though – not while on duty.

Green Tea – Needs a Place in Your Cupboard

Green tea is also a contender, especially for those who are used to a cup or two of coffee per day.

It has a relatively mild amount of caffeine compared to coffee, along with the amino acid L-theanine (bear with me – I won’t go full science). These combine to give you a productivity boost without the jitters or crash later in the day.

Put bluntly, if soda is all of the worst parts of coffee without the focus boost, green tea is the complete opposite.

The boost to your focus is not enough to dampen creativity, whilst the resulting slump is small enough to avoid derailing your train of thought.

Soylent / Coffiest – One to Look Out For

Soylent is one of those things you never thought you’d live to see; a powder-based food replacement with all of the nutrition the body needs.

What’s not to love about this space-age drink which allows you to “get a balanced meal in less time than it takes to boil water or microwave a burrito”?

Well, perhaps unsurprisingly, it turns out that this is something best enjoyed in moderation.

Josh Helton decided to go 30 days without solid food in order to test how productive drinking Soylent could make him, and the results were… Interesting.

In general, think of going hardcore with Soylent like detoxing your entire body (except rather than getting rid of poisons, you’re adjusting to a liquid diet).

The first week or so was the adjustment period for Josh, with lower energy levels and a worse mood than usual.

After this, however, things leveled out and his productivity levels saw an increase (both mentally and physically).

Once again, though, it’s not advisable to completely eschew food in favor of Soylent for the sake of productivity.

Solid food can bring great pleasure, be it over the interaction with your significant other over dinner, or just tasting what’s on your plate.

As Josh put it, “It boils down to what I value… I think I’ll choose pleasure over productivity”.

Soylent have also released a new drink called Coffiest – a concoction which is designed to give you the equivalent of your breakfast and morning coffee in one bottle.

However, Coffiest also takes a leaf out of green tea’s book by including L-theanine (the amino acid which cancels out the caffeine jitters).

Couple this with some pretty good reviews and the fact that I often skip breakfast anyway, and this is certainly a product to keep an eye out for.

What Works For Me From Experience

We all want to be more productive, but sometimes we can go a little too far to reach this goal.

Whilst I’ve experimented with various drinks over the past year in the hopes that some magic tincture will spur me on to victory, the best result is significantly more boring than this sentence would suggest.

Every morning I’ll get up, work the crick in my neck out, sit downstairs, then pour myself a glass of water and a thermos of coffee.

The water will go down first as I boot up my laptop and choose my focus music for the day.

Then I’ll sip my coffee over the next half hour; a slow release of caffeine which wakes me up, but is spread out enough to avoid any significant crash in my productivity.

Now, whilst I’m a through-and-through coffee guy, I would strongly recommend trying out green tea instead if anyone fancies a change.

Not only is it generally more accepted to be beneficial to your health, but the combination of less caffeine and L-theanine works wonders for keeping you going during the afternoon.

I might even end up giving Coffiest a go in the future – a small part of me is still holding out for that miracle drink!

How about you? What have you found to be your go-to drinks for keeping your mind ticking over? Let me know in the comments! 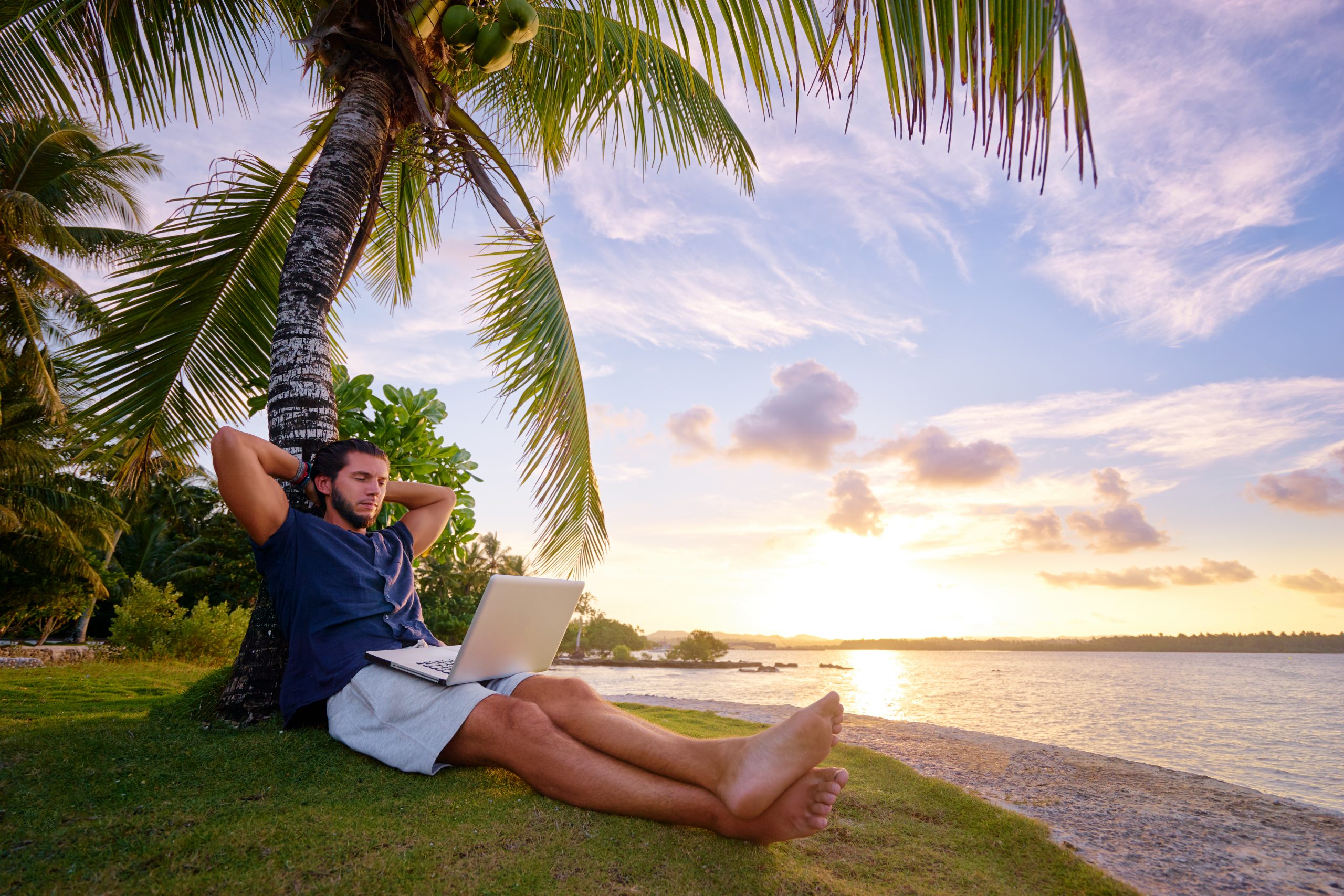